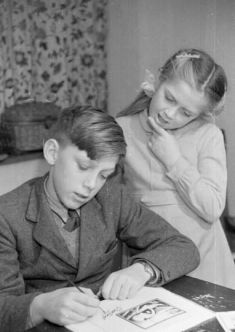 When I were a gal I used to sit dutifully at my desk and write Christmas cards for all my classmates, always enjoying the ‘To Rachel, love Rachel’ and then agonising whether Neil (the boy that picked his nose AND ears with his pen) would be offended if he was the only one in the class that got ‘from Rachel’ rather than ‘love Rachel’ (incidentally, this boy would probably not even have noticed a naked elephant wearing rollerskates and carrying a Cabbage Patch Doll had delivered the card in July, never mind what it actually said).

Such were the extent of my Christmas card-writing worries until I left my primary school class of 24 (that’s people – not, like ’24 as in the year).  Then I found myself in the wider social circle of a secondary school form class of 30 AND a secondary class for art and technology of another 15 people.  So many people!  My mother, however, thought nothing of buying an extra packet of cards for a couple of years.  Lovely mum.

Perhaps it was this early slavish adherence to card-giving that has turned me into a veritable card Scrooge.  I’m not sure when it began, but my aptitude for keeping track of the politics of card-reciprocity (cf why-not-smile!) made a rather speedy descent into complete non-givingness to the point where I have a heap of well-intentioned unwritten Christmas cards hidden in a drawer.  In recent years, I’m afraid I must admit, I have done all but mutter ‘Bah Humbag’ at the tradition I once revered.

But the proverbial ghosts of Christmas cards Passed, Presented and Yet to Come have been haunting me these past few days.  Again and again I get a sense of ‘Awww! How nice of them to think of me!’ as I open cards from Lisburn, Manchester, Maynooth…

Then the guilts set in.

My set-jawed refusal to join the arena of Christmas card politics means that I don’t offend anyone (I offend everyone) but I also don’t let anyone know that I’m thinking of them or appreciate their friendship and that is rubbish.

Its pretty late in the day to discover that I have a conscience about these things as the last day to post cards was two days ago, and I’m certain that cyber-greetings won’t quite cut it in the same sort of way.  So, unlike Dickens’ Scrooge, I am left without time to right my wrongs and salvage my soul from its misdemeanours.  All I can do is write a blog about it and hope that you feel sorry enough for me to forgive me.

For those who aren’t convinced, you might want to watch out – I happen to be an excellent shot with a rifle.…